Shadow was such a great little dog. When we first got him, he could fit into my mothers cardigan pocket when she walked the mile to our mailbox. He sat there safe and warm inside, his little paws and tiny head poking out of the top, watching the world go by. He could fit into the palm of her hand when he was only 6 weeks old. We all thought he was the cutest thing that ever lived.

Just like children, dogs have poor height perception when they're really young. My brother once broke his toe at 3 years old by jumping off of a dresser while pretending to be Superman. Likewise, when Shadow was still very little, he took a flying leap off of my brothers top bunk and we believe he broke his leg. We didn't have the money to take him to the vet, so we let him limp a bit for a couple of weeks, swearing that if it didn't get better, we would take him in. Until he was very, very old it never bothered him after the first two weeks. The arthritis eventually caused him to limp a bit after another 15 years or more.

We have a habit of feeding our pets the dry food that comes in bags. I do that to this day with my cats, occasionally breaking routine to give them a special treat on special occasions like Christmas or their birthdays with a single can of moist cat food for them to share. They gobble it down like they've not eaten in weeks because it's something new and exciting. I never give them more than the tiny little can to share though, and that's a lesson Shadow and my mother taught me many years ago.

We hadn't had Shadow for very long. He was doing just find with the puppy chow Mom bought for him. I loved his little puppy breath back then - except just after he ate the puppy food. Mom thought the food caused his breath to smell badly too, so she decided to bring in a bit of variety and see what worked best for him.

We tried a variety of dry foods first. Each had the same results as the last. The day she brought home the canned food was a day none of us will ever forget.

She opened the can and instantly the house smelled like sour beef stew. It was a horrible smell with chunks of beef and bits of gelatinous brownish-gray gravy. She pulled out the one spoon in the drawer that had been chewed up so many times with the garbage disposal that none of us ever used it anymore for fear of cutting our mouths up, and walked over to his little blue plastic food bowl. He followed her at a fast trot, barely keeping up with her slow strides. He somehow beat her to the bowl and sniffed heartily at the base. She nearly dumped the wet food right on his head.

My brother pulled Shadow back out of the way and mom put a single scoop of the gross glop into his bowl. Shadow raced over, stuck his head in the bowl and began gulping faster than a starved man eating prime rib. In three solid bites, he turned and looked up at my mother, a ravenous hunger in his eyes. He LOVED it! 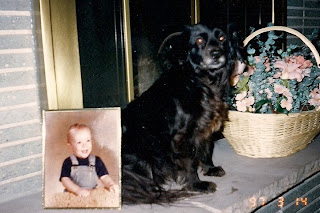 Mom put half of the contents of the can into his little bowl. It heaped over the top just a tiny bit, but in seconds, he was lapping it down like a bee with nectar. His long tongue flicked in and out, collecting as much of the horrible smelling stuff as it could, then chomping on chunk after chuck of beef until there were none left. It was gone in less than 2 minutes. He looked at my mother wanting more.

She hesitated, but she said out loud that if he was full, surely he'd stop eating. She held onto the can for a long time, and when 30 minutes went by with him still looking at her as though he was starving to death, she finally put the rest of the contents into his bowl and we sat to watch tv for a while.

A few minutes later, a faint grunt could be heard not far away. We looked around but failed to find the source. It had sounded like an elderly man trying to stand up, a long and drawn out "humph" sound. We went back to watching tv again and a few minutes later we heard it again.

"Huuumph" it sounded. "Rhhhhumph." Puzzled, we looked around again. Shadow was sitting by his polished bowl not moving. My brother was in the chair. Mom was next to me on the couch. There was nobody else around for at least a mile. "Huuumph."

As we sat watching, Shadow tried to stand up and stumbled. His front legs spread out in front of him, but he didn't fall. Instead, he lowered about an inch closer to the floor where his distended belly stopped him from going any lower. He grunted again. Mom burst into laughter.

"He ate that whole damn thing," she shouted in amazement. Amused, my brother and I went over to look. Sure enough, the bowl had been licked clean and Shadow was the fattest puppy with toothpick legs we had ever seen. His black fur stretched around his stomach in almost exactly the same shape as the 16 ounce can the food had come out of in the first place. It was as if he had swallowed the whole can with the food still inside it! His belly sounded like a watermelon when we went to pet him, and another adult sized puppy groan escaped his throat. He waddled over closer to the couch and collapsed onto his side. We never gave him canned dog food again.