Just a little while ago I wrote a blog about the trends of Shoplifting being on the rise. That was originally going to be a story of my own childhood, brought to memory by a recent experience with catching shoplifters up to no good. Though I can't go into detail about that short story for good reason, I can tell another story about Shoplifting.

My brother and I once walked into a store with nothing but a gallon size freezer bag full of pennies. Well, there were maybe 3 nickels in there as well, but it was mostly pennies. We'd been saving them for something special after my Mom one a bunch of pennies from a slot machine in Wendover, Nevada one night. We shopped and shopped, trying to find something to spend our pennies on. Finally, we agreed and decided on a hammock, priced at $4 even. We figured we could have hours of fun with it, so we carried it up to the register where the unsuspecting cashier rang it up. When we produced our bag of pennies, I wish I had been looking at his face.

We stood there for a good 30 minutes counting out 400 pennies to pay for our prize. There were more than that in the bag by far, but the cashier was so disgusted with us that he called the Manager out. Then we had another set of hands helping us count the pennies, completely disgusted with us kids. "Next time you have to take them to the bank and cash them in," the Manager said to us. "It's free to do it."

It turned out it wasn't actually free at the only bank we had access to. Our remaining pennies would have to be carried off of the military base we lived on and taken to another bank in order to get the full value of the pennies we proudly carried home with our hammock that day. Money was a rare thing for us kids, we weren't about to cash it all in and end up loosing any of it.

Mom was amazed when we came home with the nylon hammock. Dad helped us set it up on two of the trees out front and we spent hours playing in it. We would hold it closed over us and take turns flipping one another over inside it. We screamed and giggled like wild heathens for hours. We had the best time! We played with that hammock for hours.

The next day we asked if we could have some chips. Mom asked us how much the hammock cost us, and while puzzled as to why she would ask, we told her the cost.

"There were more than $4 worth of pennies in that bag. Why don't you walk down to the store and get something for yourselves. Then you can get what you like!" While it was a kind thing for her to say and quite a generous offer, we hadn't cashed in our pennies yet. "They'll take your pennies," she said, confident in the economy's ever growing need for pennies. (Insert sarcastic grin here). We marched right back down to the store, bag in hand.

We found what we wanted and walked up to the cashier with our heavy bag of pennies and set them on the counter. The chips we picked up were around fifty cents a bag, so we thought for sure that since we were being practical they would take our pennies. The cashier, the same one from the day before, scowled at us.

"My manager said you can't pay with pennies anymore."

"But it's all we have," my brother tried to explain.

"I'll go put these back," my brother said, and I followed right behind him. We got back to the chip isle, and rather than put the chips back he put them inside his jacket. He handed me a bag and told me to do the same thing. 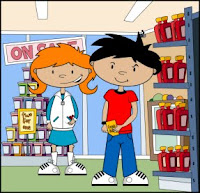 "But that's stealing," I said innocently.

Reluctantly, and full of private fear, I put the bag inside my jacket. Then we turned with pennies in hand and walked out of the store.

Years before I had gotten caught stealing a pack of gum. I was around 4 years old at the time I think, and though I knew better and clearly remember the incident, my mother thought I didn't know what I had done and needed to fix it. I remember asking her if I could have the gum and she said no. Then I picked up the pack and stuck it in my pocket later. When she found me blowing bubbles that afternoon, she asked where I got the gum from and I told her. I was brutally honest. "I took them from the store" I told her. She marched me right back to the store and made me hand the pack of gum to the lady cashier and tell her I was sorry that I stole. I was so incredibly embarrassed. And yet, here I was around 4 years later doing the same thing all over again.

Mom didn't find out that time, but the guilt lived on within me. I knew what I had done was wrong. I knew we had the money to pay for the chips, and the cashier wouldn't take it. We should have just left them in the store and forgotten the whole thing. We didn't want to cash in our pennies and have to pay for it to be done, so in the end they went into an old coffee can to await the day they would become dollars.

I never stole anything again. I learned humility the first time and conscience the second time. There won't ever be a third time, though more than once I've nearly starved to death for lack of money and too much honor to steal.