I still deal with some pretty harsh realities.  Honestly, I just spent the last several hours digging through several YEARS worth of photos for any of me during my captivity in Scotland.  This was, by no means, an easy task I set before myself.  Since that took place in 2011 and my modeling activities were re-launched a few years ago now, there have been quite literally thousands of new photos added since then, and so very few ever taken of me during that time to begin with.  But let me backtrack.  I mentioned harsh realities.

The one I'm facing right now is coming to the realization that there weren't many photos taken of me when I was there other than the photos that documented the abuse I suffered at the hands of the man in charge.  He was 'click happy' with everything he could point his very nice digital camera toward - except a fully clothed me.  He later used those photos as a form of blackmail to attempt to destroy the life I rebuilt for myself after I escaped.

Of my time in Scotland, there were only 48 photos ever taken of me looking like a normal human being.  Of those 48, the majority are duplicates; multiple photos taken at the same moment in time because my eyes were closed in some of them.  In all, there are a total of 12 individual photos I would have displayed on my social media pages back then.  The rest were duplicates of the same moment in time, capturing the facade of an abused individual attempting to put on a brave face to avoid further punishments.

No matter what anyone else can ever see from my photos, I'll always see the pain in my eyes of that realization that the life I'd been promised was taken away from me as easily as my Passport had been when I landed in another country, by someone I thought I could trust. 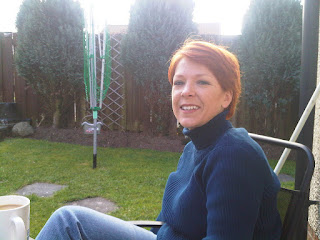