My world isn't an easy one.  I'm an outspoken survivor of human trafficking.  What I do is pretty much unheard of.  I tell the dirty, nasty, disgusting, horrible, horrifying truth about what I've been through from the perspective of someone who lived in denial for nearly 20 years of the first incident, and a full 8 years of the second.  Now that I'm coming to terms with what I've been through rather than just trying to ignore it, I'm on the way to a solid recovery for myself.  I'm recovering more than just a time in my life that I wanted to forget, but I'm recovering old photos, buried memories, forgotten dreams and lost years.

Yesterday I talked briefly about how I took time to think hard before replying to someone's genuine question about my time in Scotland.  It was one of the hardest things I've had to do for a while now.  Until a Ms. Aguirre commented on that post about it showing how far I've come on my journey, I didn't realize that was even a factor to think about.  She told me "just the fact that you could answer the question shows the growth along with the strength."  I took a moment to think on that and analyze myself the best I could with the limited education I've received through seeking answers for myself.

I don't think I fully understood that aspect until I read what Ms. Aguirre had commented, but I do believe she was correct.  It certainly took some time and thinking to get through the process, but the fact that I could answer at all does mean I've come a long way from where I was only a year ago.  At one time, a simple question like the one I answered would have sent me crumbling; reeling in emotional agony, feeling pitiful and abandoned by humanity, misunderstood and not believed.  I would have blocked the person asking the question from ever contacting me again.  I'd have cried myself to sleep.  I would have suffered from nightmares for months, consumed with the idea that someone was claiming that my abuse in Scotland never happened merely because I was smiling in the photos I posted around that time.  Ms Aguirre was correct.  I have come a long way.

I no longer take an innocent question as an attack. 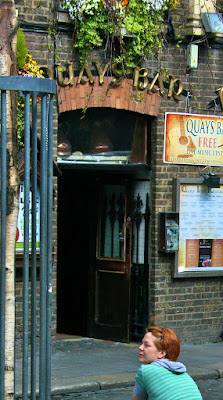 This is exactly why I do what I do.  This is why I answer the hard questions now, and think long and hard before I answer something that could easily be misconstrued as an attack against my character or against the truth that I tell.  Sure, there are a lot of people out there still willing to attack me for whatever reason they can muster, but I don't care anymore. I've had people accuse me of making it all up because "human trafficking doesn't actually exist" in their perfect little worlds, and 'nobody held a gun to my head' as I've received in messages and public posts alike.  Yet the fact remains that I did not actually have a choice until I had to con my way back home from a foreign country.  That's a story for another day.

I've come a long way, Ms. Aguirre.  You're right. That's exactly why I do what I do.  There are others who would still feel blame within a question like the one I answered. They would crumble into a heap and cry themselves to sleep.  I'm not saying that I didn't crumble and cry - but I did get back up and finally answer the hard question.  It wasn't easy, but I did it.  Someone needs to speak up for all of us. Since I'm here, I'm alive, and I'm getting asked... it might as well be me.

Candid photo from April 2011, while on a 'working vacation' to Ireland for 4 days.