San Pedro is a nice, quiet little port town. Like most cities, it has it's bad side and it has it's good side. There are no train tracks dividing the two, but there's almost an imaginary line drawn right down the middle of 25th street. The southern tip from 25th Street to the ocean is quite well off (or think they are anyway) while the northern end of town, from 25th to 1st street and beyond in considered a rough neighborhood these days. There are exceptions to every rule though, and some of the nicest houses in Pedro can be found on the 'other' side of 25th street.

It became popular with the growing import/export business and military base in the 1950's and 60's, and most of the stories from Pedro (pronounced Pea-drow, not Pay-drow, even by the resident Hispanics) revolve around the ports themselves. The sailors used to tear up the town on the weekends, the dock workers and shipyard men would work hard all week and play hard all weekend. There were brawls out in the streets for years between the groups of people, the locals always trying to chase the Sailors out of their territory.

Pedro had it's own share of brothels back in the day. They turned quite a business with the ship workers and sailors coming in for the weekends. An old WWII military hospital stood on a hill all the way up until a couple of years ago, converted into a house and lived in by meth-heads, lab creators and squatters for years until finally condemned and torn down. Now a brand new home stands in its place, a small piece of Pedro history gone forever. The "Sunken City" is an amazing story about Pedro. There was a horrible earthquake in 1933 that caused a part of San Pedro to begin sliding down the face of the cliff. All that remains is the rubble and concrete foundations to several old homes and businesses, and some of the original street. Everything else has been trashed by the local Skateboarding group called "Sunken City" or gangs that try to take control. Everything within the 6' high fence has been tagged up and trashed. Occasional murders, suicides and accidental falls from the cliffs have left the place with multiple "No Trespassing" signs and high fences, but nothing can stop the determined people from going through to the other side. I've been over there myself once.

Due to San Pedro's shady past and massive amounts of unexplained deaths, disasters and drama, ghost stories abound in the small city I once lived in. Speaking to some of the long-time residents when I lived there, I learned stories about Pedro most people won't ever hear. It took a lot of coaxing to get some of the stories out of people. 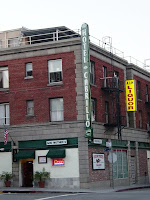 One of the old Brothels of Pedro was eventually shut down due to its illegal practices. The building was sold and eventually turned into a dentists office. While most of the office is quiet all day long, occasionally people will exit the Men's room with a look of horror and fright on their faces. When asked what had happened and why they were so visibly upset, they respond in the same way. Every one of them state that they could feel the long fingernails of a woman scratching gently on the back of their necks, brushing through the bottom of their hair and going towards the shoulders. Each person stated that it felt like a slight tickle; a gentle breath on their ear. Most of the men interviewed didn't mind, but a few swore to never go back into the men's room at that particular dentist's office. Some will walk down the street to a restaurant or a grocery store instead, if they do decided to ever use the same dentist again. 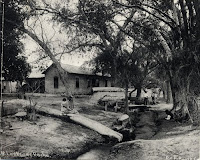 The old Hospital that had been converted into a home before being torn down was surrounded by horror stories. In my travels I eventually met someone that was best friends with a child who grew up in that house back in the 1980's. Often they would hear scratching on the doors, banging on the windows and an unexplained sound of footsteps down the empty hallway, always at 2am. Moaning could be heard throughout the house and the sound of the metal military cots could be heard creaking and clanking on the floor at night. Medical instruments would show up out of nowhere, like medical clamps and dried up, bloody gauze. One time an antique nurses uniform inexplicably showed up in the attic storage boxes. As if that wasn't creepy enough, every time the city of San Pedro would sound the Air Raid sirens installed in the 1940's, all of the lights in the house would turn off, one at a time as though someone was walking through the house and hitting switches room after room after room as the occupants sat in amazement.

One bar in San Pedro boasts of the nightly call of the Sailors as they sing out in drunken voices from an empty bar after everyone has gone home. Another claims to find broken beer bottles on the floor inside every day when they open up and took the measures of putting in a camera to see who it was getting in after closing each night. On the video as clear as day, a display beer bottle up on a shelf displaying the beers offered at the establishment, will suddenly tip over and crash to the floor. It's always the same brand and always around the same time, though the days are sporadic. The owners of the establishment even tried to move the display beers to another shelf to see if it continued to happen, and the exact same beer would still fall to the ground, leaving the rest untouched. They finally began putting the beers away at night, and within a week, a smashed beer bottle was found on top of the bar, more than half of the pieces missing. The owner now keeps the beers out at night, but has a hanging basket just below the beers filled with Cocktail Umbrella's. They just pick up the unbroken bottle in the morning and put it back in its rightful place. San Pedro is full of it's own charming little ghost stories around the cliffs, whispering through the trees, in the catacombs that make up the old Fort MacArthur, and all through the hotels, restaurants and bars that have been around since the turn of the century. Still, all of these stories have been second-hand tales. I actually have my own experiences to share... stay tuned.