"Bring in an extra body at 5am," I was told. Originally I planned to do it myself, but at the same time I knew that I wouldn't get paid for it. I'm salaried. Instead, I gave it to a really good kid. I knew he didn't want to get up at 5am, but it will look nice on his next paycheck. Of that I can be certain.

I got in closer to 6:30 this morning instead. There were no lines. Two stores were open and I passed a total of three people on my way to the local Starbucks. It was a ghost town.

On this, the busiest shopping day of the year, I have an extra body on at work, I have the evening off (usually I work Friday nights) and I have no plans. I'm far enough away from the freeways to have a fairly slow day. That's something I'm certainly thankful for. 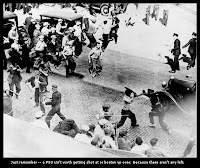 Last year people were actually killed - stampeded to death - running through a Walmart for some cherished toy or electronic gadget before someone else got them all. It happens EVERY year now it seems, and in pre-shopping interviews people brag on the news about how they plan to 'shove others out of the way' to get to whatever it is they're wanting. I find it all more than disgusting. Sales aren't worth it, I don't care how good the sale is. Black Friday, year after year, I find myself hiding from the public as much as possible.

For the last couple of years I've taken it upon myself to select a "Salvation Army" tree angel. The Salvation Army will take the names of children less fortunate and put them on these pictures of angels along with their clothing and shoe sizes if the kid is asking for clothes, or just check the "toy" or "Gift Card" section of the paper if that's all the kid wants. Year after year I look at the tree day after day, trying to figure out which angel I will take home and purchase a gift for. Year after year, I look for one that does NOT have the "toy" box checked. Plenty of people will give toys to kids. It's the young lady asking for a new pair of shoes or a boy who only wants a warm sweater for the winter that wins my heart every time. Year after year I finally select my "Salvation Army" kid on Black Friday.

I don't have much to give, but if there's some poor kid out there asking for nothing more than a new shirt, I'll make a personal sacrifice to get that for him. I've got my own bills piling up that need to be taken care of, but I'm at least warm and cozy at home in the evenings. The kid I've picked this year is a 14 year old boy named Jeffrey who only wants some new shoes or a new shirt. While it's been months since I've purchased any new clothing for myself, I can only imagine it's been years since this kid has had anything more than hand-me-downs or previously used items. I'll have to shop around, but I'll get him something special, something to keep him warm.

Most people would opt for the angels that are looking for toys. Shoes are hard to get for kids, they say. They ask what the kid would do if they don't fit. Well, if they're asking for shoes in the first place, I'm pretty sure they won't care if they're a tiny bit big to begin with. The kid is 14 after all. If they are to big, he'll grow into them.

My grandmother sometimes couldn't afford milk and bread, yet every year she would send whatever she could to St. Jude's Childrens Hospital. While I participate in the "Salvation Army Angel Tree" I also send a tiny bit of something to UNICEF by way of the Audrey Hepburn foundation each year. I've had a struggle to survive this year, but if anything I've been through has taught me a valuable lesson, that lesson would be that things could always be worse. There are MANY people out there far worse off than I am or have been. In some small way, I want to give back. I've made it. I've come this far. It's time to share that with others. So while UNICEF is world wide and Salvation Army is local, I guess it could be said that this year I'm trying to help near and far. 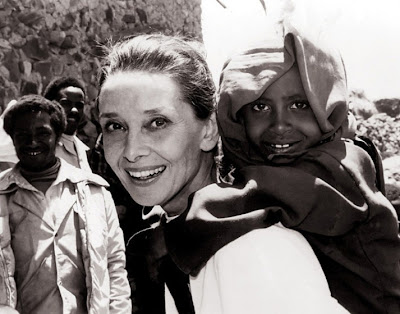