Broken Bones, not Sticks and Stones


The ball sailed through the air and I leaped up to catch it in mid air. My feet landed on the ground and I ran with everything I had. I knew I could run faster than the boys, but they were bearing down on me pretty fast. I needed to grow wings if I was going to score a touch down.


I spotted the satellite dish on the ground in front of me. The yard was pretty small, so it wasn't out of bounds. I was smaller than anyone else I ever played with, both shorter and thinner, and I knew I was far more agile. I could just duck and run under it while anyone else would have to either slow way down or go around it. I headed straight for it.


We were playing two hand touch, so what happened next really took me by surprise. Bryan soared through the air and suddenly I stopped running. The ball slipped from my arms, coursed through the air and bounced out of the middle of the satellite dish, flying erratically from the awkward angle at which it bounced in the rounded shell. Meanwhile, my body fell to the ground with a sickening thud and coursing pain. I was pinned down with my foot under the chest of a guy easily 50 pounds heavier than I was.


Bryan rolled off of me and asked if I was ok. I sat up and looked around. I knew my foot was hurting, but I figured I could just shake it off.


"Give me a minute," I said. "It kinda hurts a little." I cradled my foot in my hands. The pain grew. I didn't hear the words coming from my mouth for a minute, but as I sat there I became more aware of hearing myself saying "Ow, ow, ow" over and over in a surprisingly calm and relaxed manner. I took my shoe off and slipped my sock over my throbbing foot to shove it into my shoe. My foot looked fine, nothing in the world wrong with it. I didn't even have a bruise.

Bryan ran for the house. My mother and his were friends and we were in their back yard playing. He ran inside and both moms followed him back out. My mother was complaining of a migraine headache and had a "no nonsense" approach toward me right then.


"If your foot hurts then get up and come inside," she said harshly. It wasn't until then that I began to gently cry. I was 15 years old and had gone through amazing amounts of pain in my life up until that moment. It wasn't the pain that caused me to weep, but rather her tone and loss of compassion for my pain. The Saturday sun blazed down overhead and the heat only made it worse.


"Oh, it is not," she stated plainly. "If it was you'd have bones sticking out. You're fine. Now stop being such a wimp and get up."


With Gail's help, I struggled to my feet and walked on the heel of my foot toward the house. Each step was very painful and I feared my original guess was correct. Somehow I just knew my foot was broken. It had begun to go numb beyond the middle of my foot. By the time we got inside and I was sitting in the recliner, I could barely hobble on it. I hopped the last few steps.


"See," my mother said, "it's not broken or you wouldn't have been able to walk on it."


"I thought you were going to run into the satellite dish," Bryan said. "I tackled you so you wouldn't hurt yourself. I'm sorry." I nodded in appreciation. It was sweet of him to think that way.


"I was aiming for the satellite dish," I explained. "I knew you couldn't follow me and I'd be able to score a touch down." Bryan smiled. He knew his apology had been excepted.


"Straighten your foot up," Mom said to me, putting pressure on my toes trying to force my ankle straight. It wasn't until that moment that I screamed. The pain shot up through my entire body and made something in my spine tingle like an electric shock. "Oh, hush," she said to me. "You're being such a baby. You want to go home, or do you want to go back out and play?"


"Maybe it's really broken, Beth," Gail said. "I mean, it looks fine, but maybe you should go have x-rays taken."


"No, she's fine," my mother insisted. "Manda, just sit there for a while and take it easy. When you feel better you can go back out and play."


I watched TV with Gail and my mother for a good hour and my foot only got worse. Occasionally my mother would push up on my toes again and each time I would scream out in agony.


"Manda, I have a headache," she explained. "I don't feel like putting up with this today. If you want to go home, then get to the car."


I thought about the 30 or so concrete steps leading the way up to Gail's house from where we had parked. One handrail lined the steps. I couldn't imagine going all the way down those stairs on my own.


"No, you can make it. You just have to suck it up. You're fine." I hopped to the door, Bryan giving me a hand out to the top of the stairs. "Let her do it," my mother told him. Bryan obeyed and let go of my arm. I grabbed hold of the hand rail, leaned part way over it to rest my body weight on the railing, and slid down to the next step. I paused a moment, leaned again, and slid again. Each time I would land on my left leg, the jarring would cause my right foot to flair up in pain again. It progressed, getting worse and worse with each step.


Nearly to the bottom, my mother decided to give me a hand. "It's probably just a sprained ankle," she said, finally willing to admit that I was actually hurting. She opened the car door and helped me inside.


That night when dinner was ready I couldn't traverse the stairs even with the hand rail to lean on. I got on my hands and knees and crawled up the stairs to the dinner table. My parents scorned me, called me a baby, and told me to grow up. I wanted to cry, but I knew that I was stronger than that. I'd show them, I thought. I could feel the skin around my foot tightening as it swelled to an unnatural size.

That night sleep was fleeting. It was Sunday morning when I sat up and pulled the blankets back from my throbbing foot. I called to my mother who came down reluctantly. I hollered down the hallway that my foot was swollen.


"Well Manda, you probably sprained it," she repeated her guess from the day before as she walked into my room. Then her eyes fell upon my foot, now swollen to 3 times its original size. It resembled the football I had been playing with when it all happened. "Uh," her tone changed, "Manda, get dressed. I'm going to take you to the hospital.


Three metatarsals, numbers 2, 3 and 4 were broken. Here I thought it would be bad if I had broken one bone in my foot, but to break three was really justice! I had wanted to show them all that I wasn't stupid or childish or wimpy. I wanted to show them that I had actually taken real pain without whining about it or crying constantly like what even I thought a typical girl would. I hadn't even complained when having to crawl on my hands and knees to the dinner table. I was, for once, justified.


Mom's face softened when she saw the x-rays. My three middle toes were snapped in the middle of my foot. Somehow my big toe and pinkie toe metatarsals were fine, which made no sense to any of us. Mom put her arm around my shoulder while the doctor placed my foot on a metal rail in order to keep my ankle straight. Then he began to wrap it in white gauze. The bones in my foot were never set.


"It's actually a good thing you waited a day to come in," he said. "We couldn't have wrapped it up yesterday because of the swelling. As it is, this will be a temporary cast," he explained as he held out several colors for me to choose from. I pointed to the purple. "This cast will have to be cut off in a week when the swelling goes down, and another one will have to be put on." He dipped the casting material in liquid and began to wrap the white gauze with the purple mesh.


The entire way home my mother asked if there was anything I wanted, stopped to buy me some new art books and fun games, even a new set of colored pencils. She bought some flavored ice pops and sodas, some candy and gum, chocolates and all sorts of goodies for me. I got to sleep in the guest room upstairs that night, closer to them, so she could keep an eye on me and I wouldn't have to crawl up to the kitchen. I slept in the antique bedroom set we weren't even allowed to touch as kids. I used my mother and fathers bathroom, had my mom brush my hair a few times (that always puts me to sleep, even now) got whatever I wanted, was never questioned for being out of bed in the middle of the night for a drink of milk and was doted on out of pure guilt by my mother.


The temporary purple cast came off and the new white cast went on for an additional 5 weeks, and for a full 5 weeks I felt like a princess. I still wanted to go out to play and couldn't, so by the end of the 5 weeks I was more than ready to hit the door running - with one leg slightly less dense than the other. It was a good 3 inches thinner in diameter than the other and had the occasional scratch mark on it from where I stuck a ruler down the cast to scratch at the itching surface. My father taught me how to do that...


During the time I was in a cast I couldn't participate in gym class. This started a new adventure for me that I'll never forget - reading to the Special Needs class. But that's also a story for another day.

Here I am with another break - on the same foot. What adventures await me this time? 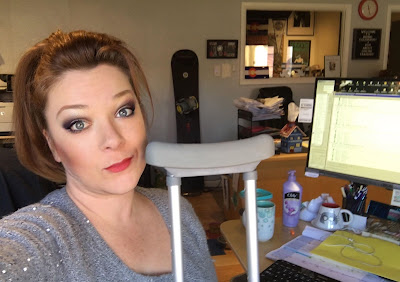