It's not the kind of nervous that you get before going on a blind date or the first day at a new job. That kind of nervous is usually considered to be butterflies in the stomach. This isn't that kind of nervous. This is more of the heart palpitation, heart beating in my throat during some extremely stressful moment in my past when I genuinely feared for my life. I know I shouldn't be that kind of nervous, but I am still. It's been a rough few weeks for me, there's no two ways about it, but it's just therapy. It's just a counselor. And yet ... it's a counselor. It's a therapist. It's a shrink, as I would have said for the past 25 years now. But now I have to change my way of thinking if I actually want to make this work. I need the help. I've been through a lot. I can only learn so much with my own psychological research. I need a professional. But is she ready for me? I've been through a lot. Anyone who knows me knows this.

My stomach was terribly upset and I was unable to digest my breakfast this morning.  I paced back and forth, antsy and impatient, staring at the clock, wishing it would freeze and simultaneously wishing it was already tomorrow so it was done and over with already.  Finally it was time. I headed for the door, physically ill.


"Have you ever been to a therapist before," she asked me.  It was an innocent enough question, but the floodgates opened and suddenly I was bawling without knowing exactly why other than my intense fear of therapists.  It wasn't like I'd been molested by one or anything, but I certainly didn't trust them.  I had good reason not to.  Yet she had a kind face and I was pretty sure I could take her in a fight.  I laughed at myself amid the tears. Of course I wouldn't fight her.  I don't fight.  Not like that.  She looked confused over my tears at her question.  I knew I had to answer.  I swallowed, took a breath, and focused.  Amid sobs I finally spoke.

"I have, yes.  I was fifteen and she messed me up for a long time."  Her expression changed only slightly, but to one of incredulous despair instead of just surprise.  I wanted to let her know everything at once but it's impossible to tell an entire life history with a whimper so I knew I had to find my words.  I just did a full 90 minute interview over the public radio talking about all the traumas of my life, why was this one in particular so hard? In fact, I'd even talked about this particular trauma over the radio too - but I wasn't speaking to a therapist and that was the difference.  I had to tell the therapist about the therapist who gave me issues with therapists.  How well was that going to go over?

"I was fifteen when my parents took me.  But let me back up a little.  When I was 4 years old my mother took both my brother and me to the doctor because she'd known a friend who had her kids put on Ritalin for them having too much energy.  My mom decided we had too much also, so away we went.  They put my brother on it for ADHD but they said I was fine.  So my mother didn't believe them and started breaking my brother's pills in half and giving them to me.  About a year later she took me off for a few days and took me back to the doctor, but at that point I was already addicted to them I'm sure, plus I had other behavior issues too.  We'll get into that later," I prepared her.  "So since I was having issues and drug withdrawals they put me on these pills too.  When I was fifteen I took myself off of them but I didn't tell anyone. I just knew I didn't need them.  Of course I was going through drug withdrawals, and by that point I'd been molested by three different people - two were family members and one was a total stranger - and I was having all sorts of issues.  The total stranger in the Hastings parking lot when I was 14 was the reason I stopped taking the pills, I think.  Anyway, I took myself off.  So my parents thought I was suicidal and I was having all sorts of other problems like running away from home and skipping school and stuff, so they took me to a therapist they picked out.  The therapist put me on Klonopin, Paxil, Prozac - all these anti-psychotic drugs, and I didn't take them either. I didn't want a pill. I didn't want a bandaid.  I wanted to know why I was so angry and hurt and feeling like an abused kid but not having any bruises to show for it.  So then  the therapist told me something... She told me "if you want your dad to like you, or really any man, you have to find something in common with them. Men and women think differently.  If you don't make the effort and find something in common with them, they won't be interested in you."  And do you know what kind of damage that did to me? I thought I'd found the secret to the universe!  If I wanted people to like me, all I needed to do was like what they liked.  I did that in every single relationship, romantic or otherwise, for YEARS! The damage was done!  First, I wasn't good enough for my Dad to make an effort to like me unless I made him, second, pills were a band-aid for any emotional hurt, and third, I lost myself in every relationship I ever had.  Have you see "The Runaway Bride" with Richard Gere and Julia Roberts?  There's a part in it where he says to her that she doesn't know how she likes her eggs.  When she was with one guy he liked them scrambled so she had hers scrambled too.  When she was with another, he liked poached so she liked poached.  Yet another, he liked omelets so she liked omelets. She didn't know how she liked her eggs.  That was me.  That was me for a long time every time I got to know someone new.  I learned how to become 'the perfect girl' for them, and I did that for a long time.  For a little while, until I turned 18 I counted how many times someone would tell me I was "the perfect girl" and the number would surprise you.  I was so messed up from that.  I was so messed up because of a therapist that I never trusted them after that.  I've been sick for the last several days, scared to death of coming here and being here.  Scared of meeting you.  Scared you'd want to give me some pills to make my life magically better.  Pills don't make life better.  They're not a fix.  Eventually Julia Roberts in that movie realized she didn't even like eggs."

It was amazing how much of my adult life could be summed up in that simple story that took only 10 minutes to tell a stranger.

And I never liked any of those eggs. 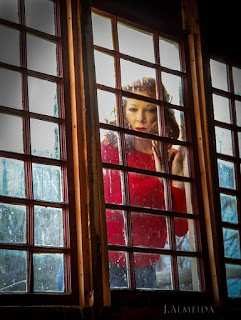