Abuse by Braces? Or Deserved Punishment?

I mentioned yesterday that I had some pretty serious behavior issues as a child and teen.  I don't deny that.  I do deny that I'm still a 15 year old child who lies about everything, runs away all the time, and would do almost anything for attention of any kind.  I've clearly grown up.  I also stopped running away finally and take things head on in a way I could never have predicted I would only a few short years ago.  Surviving what I did in Scotland forced me down this road, I think.  If I'm going to actually get through the darkness and come out the other side a stronger person, it's going to take work. It takes the kind of work I would have been too lazy to put into myself a few years ago.  But I've been through Hell and survived.  Now I just need to survive the gate keepers and emerge the other side.

I'm reminded of a lot of things I had to deal with growing up.  One of them has given me a LOT more strength than I think I would have otherwise.  I realized when I was a 17 year old that I'd already had everything taken away from me, and I had nothing left to lose.  I lived in an empty bedroom aside from the mattress on the floor and the sheets that covered it.  I had no books, no papers, no pens or pencils, no friends, clothes, shoes... all I had was what I wore every day to school, and washed every night while wearing my one wool nightgown.  It wasn't that we were poor.  I'd had everything taken away from me because I was a perpetual runner.  My book "The Miller Miles" actually tells of one adventure I had when I ran away at 17 years old.  But I did have something in my possession that most kids in my position didn't have.  I had braces. 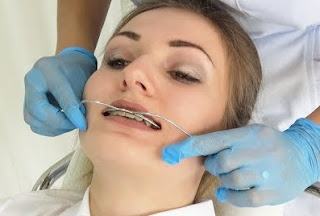 I didn't have a full set of braces.  Rather, I had two metal band brackets on two of my molars that came equipped with little metal tubes between my teeth and my cheek flesh.  They were there to host the body of "headgear" to push my teeth backwards; headgear that looked almost identical to what you see in the stock photo here.  Not surprising, I don't have any photos of me in my headgear.  I also had individual braces on several of my other teeth, but not on all of them.

I remember when it all started, the orthodontist was really nice.  He found out I always had a crush on Cary Grant the actor, and told me that Cary Grant wouldn't smile to show all of his teeth because he was a boxer before he was an actor.  He'd had one of his upper middle teeth knocked out and they all grew together to close the gap. He was embarrassed about his teeth, so he didn't ever want anyone to see them.  I was mesmerized.

I'd always wanted straight teeth. I'd been teased terribly about my teeth and hated them terribly. My mother had gone through extensive dental work years before, starting with braces and ending with an EXTREMELY expensive jaw surgery to bring her lower jaw forward about a 1/4 of an inch I believe.  She had an under-bite before that and wasn't comfortable with having her photo taken before that.  She gained a level of self-confidence she'd never known after everything was done. I was so proud of her! She was my role model. I wanted to be just like her as soon as I could be.  I wanted to be prettier with better teeth like she had been.  Orthodontists were magicians.  I'd been the 'ugly kid' in the middle of what my mother called my 'awkward stage' for almost a decade. I needed to feel better about myself.  I wanted braces.

There were all the usual threats, of course.

They were threats I'd heard a million times for a million other things, like self defense classes when I was 15.  I really loved those classes, but I never even got my yellow belt because I ran away from home and they stopped letting me go.  It was, of course, completely understandable.  I'd have done the same thing in their place to be honest.  I didn't deserve something fun or special when I was being a brat.  I also wasn't allowed to be in the elite choir anymore at 16 in spite of my passing the auditions with flying colors, which wasn't easy.  I had skipped too many classes.  Like I said, I was a brat back then.  I had some serious personality and behavioral issues. Here I was 17 and finally being fit for something I'd always wanted - my braces.  Of course, I'd also always wanted to take Karate classes or something similar, but I screwed that up.  I'd also always wanted to be recognized as having a special talent or gift, for being special, for getting into an elite group, like that choir class - and I screwed that up too.  It was basically compulsive. I couldn't help but screw things up.  It's what I did.  It was a part of who I was by then.  It was as though I was terrified that something would actually be a positive in my life, so I had to mess it up before it could turn into something good.  Honestly, I think a lot of that stems back to my very close childhood relationship with my brother, who took advantage of that bond and molested me when I was 4 years old.  He had been my best friend. I'd idolized him.  After that I stopped waiting for him to get home from school.

I guess it was inevitable that I'd screw up the braces too.  I couldn't help it.  It had become my trademark in a way.  I couldn't finish anything.  I couldn't allow something good in my life.  I would sabotage anything and everything, including friendships with classmates.  I would get close to a friend in school and suddenly abandon them, terrified that if I didn't, they'd just beat me to it.  It was that summer when I ran away with Byron Miller (see: The Miller Miles) and didn't take my headgear.  When I was made to go back home (the book details what happened, how long I was gone, and how I got back home - as well as the revenge I took on Miller afterward), of course my shot at straight teeth was gone.  The orthodontist appointments were toast.  That includes all of them, meaning I'd never see an orthodontist in order to get my braces and metal molar bands removed. 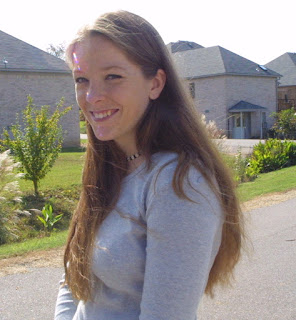 For a long time I picked at the braces with my fingernails.  Occasionally I would split a nail to the finger.  Once or twice I broke wires that would shred the inside of my cheek.  Eventually I would have a bracket come lose from a tooth and dangle by wires inside my mouth, occasionally getting trapped between my teeth when chewing on food.  Never once did I complain about it.  I wouldn't give them the satisfaction.  I'd been called a 'baby' for complaining too much as a child.  There was no way I'd complain to them about something that I'd clearly caused myself, my mother would say.  By the time I got the final metal band off of my back molar, I was 22 years old and had been living on my own in another state for a number of years.

(Photo from 2002, approximately 2 months after I removed the last bracket.) 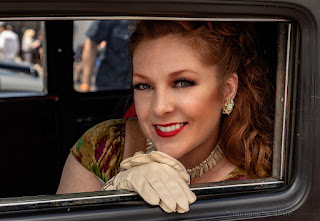 (Photo from April 2019 by Blair Wacha, in Austin TX on a charity work trip.)

It wasn't until 2015 I finally tried braces again.  I got Invisalign - because I couldn't stand the idea of having metal in my mouth ever again.  Now, even though I haven't worn my retainer in about 2 months, my teeth are beautifully straight.  When I look at old photos of me, I barely recognize the person I used to be.  It's more than just the straight teeth, it's the attitude toward life in general.

It's been a while since I've really talked about the braces I had as a kid, and that's for good reason.  Too many people told me that what they did was 'child abuse' but I knew that I'd deserved it.  I didn't hold up my end of the deal.  I didn't stay at home to be screamed and yelled at constantly, and I ran away.  I put myself in a dangerous and precarious place because I wanted a sense of freedom and couldn't find it anywhere.  A part of me also wanted to die.  I was a 17 year old kid who had been through a lot already, and nobody knew the secrets I was holding on to.  Nobody would have believed me or cared. I was already a liar about so many things, why would anyone believe me at 17 years old with the history I had?  So instead of telling anyone what I was going through, what I had gone through, or what I was scared to admit to, I kept everything inside.  As my parents reminded me frequently, they "couldn't believe a word that came out of [my] mouth anymore."  I had nobody I could turn to.

Was it considered abuse to leave me with the braces?  Was it abuse that made me think it was my own fault and that I deserved it? Maybe... and I still struggle with that to be honest.  I didn't hold up my end of the deal.  As a seventeen-year-old kid I already knew I wouldn't be able to, but I wanted to make the effort anyway.  I honestly tried, until my young and underdeveloped and Ritalin-stunted brain snapped yet again.


My teeth are straight, and the brackets are gone. But, as surprising as this might be, I still have just a tiny smidgen of brace glue attached to my left incisor from over two decades ago.  I'm reminded of the metal in my mouth every time my tongue flicks over the tooth.