Unsupportive Parents and the Damage they Cause


I grew up with a mother who compared me to an aunt she felt wasn't very pretty. She told me how it was such a shame I looked so much like my Aunt Debbie with the red hair because she never thought my aunt was a pretty lady. I disagreed wholeheartedly and loved my wacky aunt very much. She wasn't much older than we were (she was from my paternal Grandfather's second marriage, to one of the most wonderful women I ever knew, my step-grandmother Irene). In fact, I dare say I may have idolized her. She was so cool she even taught her cats how to use the toilet instead of a litter box in the 80's, before people even knew that was a thing. She was AWESOME!

My mother went so far as to tell me how horribly ugly I was when I cried, and one night while sitting at the dining room table something was said or done that made my tender heart break. When I began crying, my mother ran to grab the Polaroid camera so that she could document the moment and show me (forever) just how ugly I was when I cried. Of course all it did was make me cry harder, and burned a horrible moment into my memory. To this day I can't look people in the eyes when I'm crying. That "ugly cry" expression so commonly used today is one I was familiar with well before its time, much like my aunt's cats and the toilet training. Only one is funny, while the other is devastating to an 8 year old kid who wants nothing more than acceptance and love from authority figures - aka 'parents'.

Being put on Ritalin (illegally) when I was four and then (legally) when I was five also didn't help matters. I wasn't a kid anymore, I was a zombie. I never developed any interest in participating in sports, and part of my brain contributes that to my zombie-fied state, and part of it contributes that to my lack of interest in the world at large. Why would I have no interest in the world at large, you might ask? Well, that's a common theme among abused children. Anger, confusion, trouble in the teen years with lying, running away, rebelling... they're all earmarks of someone troubled at a young age who didn't get any help. I was constantly concerned that I would do something wrong. I didn't do great in school. I had what some would call 'extreme behavior' going from hot to cold (from being a good kid to throwing a "Hell Fire" tantrum). I had constant stomachaches without any clear cause and spent LOTS of time in the nurse's room at school. All of these things are signs of a child who has been abused in some way. These signs and what to watch for weren't common knowledge when I was a kid. In the 80's that was just the universal language of being a brat. Now, modern medicine knows otherwise. Now, modern medicine would have known what was going on, if anyone had been bold enough to report it. While I lashed out at my parents for what my own brother had done to me, and even lashed out at my brother when I got a little older, my brain had no idea why I was doing it.

As a teen I began lashing out even more - rebelling to the point of refusing to take my Ritalin. At 15 I took myself off of the highly addictive substance after an eleven year dependency. I did this on my own by refusing to take them anymore. Knowing my mother counted them, I'd either hide them in the trashcan under discarded bits of paper towel or yesterday's newspaper, or I'd flush them in her toilet just to get a little sense of accomplishment, thinking "if only she knew" as I angrily shoved downward on the little silver handle. That was when the Shrinks started.

Of course my parents took me to shrinks. I was skipping school, lying about anything and everything, wearing black, and - whether they knew it or not - thought a lot about suicide. It was all the drug dependency and withdrawals, I realize now. I was never really suicidal, but I certainly wanted people to think I was because I wanted someone to care. I was constantly not wanting to go home, more afraid of going home than anything and not really sure why other than knowing that both of my parents were terminally angry at me for the years of behavioral problems I'd been exhibiting since an early age. It caused a lot of anxiety and worry in me. I skipped classes, and my grades dropped drastically. Right before I turned 16 my grade point average was somewhere around a 1.6 I believe. I stopped caring quite so much about what I looked like around then. Shrinks put me on all kinds of medications, including one called Klonopin, which - as it turns out - is actually an anti-seizure drug. I didn't ever have seizures as a kid, so this perplexes me now. I was also put on Paxil, which is an anti-anxiety drug. A child of 15 experiencing enough anxiety to be put on heavily controlled and addictive drugs clearly has something else going on to cause that kind of anxiety. Instead of treating the problem, they decided to treat the symptom. Paxil, for those who don't know, is similar to Xanax. Finally, I was put on Prozac, a very powerful antidepressant, as well as a treatment for OCD and panic disorder. What need would a child of 15 have for such drugs? Clearly there was something very wrong with me, and I wasn't talking.

Why should I tell this shrink, I clearly remember thinking to myself. It was obvious that my parents had gotten to her before I ever had a chance to talk. This lady wasn't going to believe me or trust me. She didn't know anything about me except what my parents told her - and my parents had been telling people for years that I was addicted to drugs and sexually active. Neither were true, of course. I was still very much a virgin at 15 years old, and to this day I've never had any drugs that wasn't prescribed to me except the few times I tried marijuana, which I turned out to be allergic to. Don't get me wrong, I had PLENTY of friends who did drugs, but I was always the one sitting back laughing at their stupid antics rather than feeling like I needed to participate. They might have been doing drugs, but with the exception of one person, they were pretty respectful when I told them I wasn't into it. I laughed hysterically as "T" would describe the psychedelic ooze on the walls or that "D" was suddenly missing his nose. I rolled my eyes at the ones on acid, complaining about the dragon chewing on their shoe laces. But never once was I even tempted to try. Never once did they try to pressure me, knowing full well I'd walk out of there if they did. "J" even defended me once when someone called me a chicken for not wanting to smoke pot with them. He told them 'that's not how we do things here' and to this day we are still friends. Of course he's more 'straight edge' now, with kids of his own. I still trust J with my life. If anything were to happen that I thought he could help me with, he'd be one of my first calls. Always. I also wasn't a drinker as a teen. You see, enough of my life was being controlled by everyone else. I already felt like I couldn't control anything. I already knew that people in my life were angry with me. I knew I'd already gotten in trouble enough - some for things I'd done, and some for things I hadn't. The last thing I needed to do was start drinking alcohol, which I didn't even like the smell of, and getting into more trouble with people who were so angry at me they could hardly look at me.

I was a very troubled kid, but no matter what I did wrong back then I was never as bad as my own parents made me out to be. By the time I was a teen, I'd already been through a lot that they never knew about. I developed a LOT of unhealthy coping mechanisms. I still carry some of those with me now, actually. I'm still dealing with them, regularly.

People might hide it, but they don't lie to say they had been abused. They lie and say they hadn't, quite often. However, actions speak louder than words. Behavioral problems stem from somewhere, and if you're able to track it down you might be able to heal from it. Facing it isn't easy. Talking about it is even harder. Dealing with it is a stretch for most. Not blaming yourself for it feels impossible. Having to do it all alone, without any family on the face of the earth actually wanting to believe that it ever existed is one of the worst feelings I've ever known. Yet I'm doing it, because I know it's the right thing to do.

For all of those struggling to face childhood trauma, or remembering things you've been told 'can't be true' just know you're not alone. Also, know that there is help available. 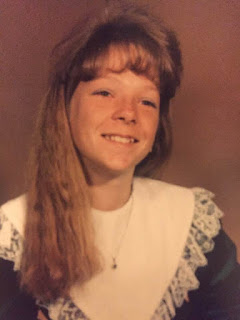 Look how naturally RED that hair is.