#wherewereyou
.
I remember the gas station was packed when I passed it on my way to work and people with 50 gallon barrels in pickup trucks were loading up fuel at the pumps. People were shouting and screaming. Panic was setting in around me and I bumbled my way along like the 21 year old oblivious kid I was.
.
I was walking into a small cafe restaurant where I worked as a server. My coworkers were both staring up at the TV screen near the register and I had no clue what could possibly so interesting. I stood there just a moment, dumbfounded by their lack of response when I asked. One of them simply raised a hand and pointed to the news.
.
I watched just a split second as a graceful Boeing 767-200 arched its way gracefully through the smoke filled air, completely oblivious that this would be the infamous United Airlines Flight 175. It flew in front of what appeared to be one of the twin towers on fire.
.
It vanished through walls of glass and the world around its frame blew outward into an explosion of flames. Glass flew in all directions. My jaw fell slack and fat tears somehow emerged from my stunned face, quickly finding way to my chin and dropping to the floor.
.
In that moment, I knew as I watched that the entire world was about to change. Eighteen years ago, the entire world *did* change. For a few days the entire nation was United in combined efforts to help fellow Americans. An outpouring of love and sympathy washed over New York and the United States from around the world. Phone calls poured in from London, Paris, Sydney, Rome, Berlin... around the world people wanted to rush to the aid of one of the most powerful nations in the world. We were hurting, they knew it and wanted to help.
.
For a day, humanity was being humane. There was a lot of loss and confusion and anger and hatred and hurt and pain, but above all else, just as God commanded, there was love. Humanity proved their potential.
.
We lost 2,977 innocent lives that day. More than 6,000 more were injured. More still were lost to suicides in the wake of the second deadliest attack ever to happen on American soil. We lose still more from medical complications, breathing in the toxic air as they rushed to save the lives of anyone they could find. The death toll for September 11, 2001 continues to grow even now.
.
We shall NEVER forget.
.
2,977 innocent lives.
412 Emergency Responders
25 Flight Attendants
8 Pilots
1 Single day.
.
Where were you? 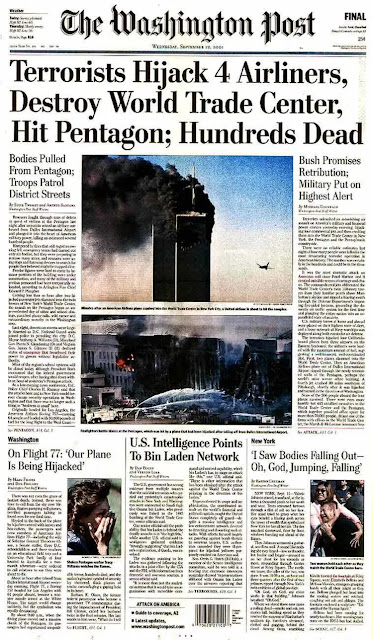