Abusive Remorse and What That Means

I would love to know how or why abusers feel no remorse, guilt, sorrow or shame at how they treat others?


Some do. Not all, and it's rare, but some do. I think it has a lot to do with different brain disorders, like narcissism (NPD) and sociopathy, Sometimes those people don't have the mental capacity to feel remorse. Others who have a chemical dependency on drugs or alcohol feel remorse after the fact but are incapable of feeling anything for anyone because of the chemicals in them.

Then there are people like my mother. I think she strongly believes that everything she did was in my best interest because she didn't know how to deal with an unruly child. No matter how much she tries to claim I'm not a "real" redhead because it's not carrot orange or ginger (my hair is a subdued red, I'll give her that much only) I always had that redheaded attitude.  She couldn't stand that about me. I was rebellious and independent starting at a very young age.  Hurting my feelings or insulting me only made me more so.  Taking photos of me when I was crying in order to prove to me how ugly I was when I cried and other such incidences caused such a rift between us that I continued to both rebel against her and seek her approval for the rest of my years living at home.  It's the 'gas-lighting' abuse that is so often talked about and represented in emotional trauma and abuse.  That was a perfect example of gas-lighting in my childhood.  It brought about confused emotions. I both loved and hated my mother.

My brother was abusive - I assume - because he'd been abused. I don't know if he was abused by a babysitter or someone closer to home (my money is on the one perverted sitter we had who made us change clothes in front of her all the time and introduced us to pornography when we were very little) but he was only abusive because he learned it somewhere and was warped by it himself. It's a learned behavior at 7 years old, not an inherent one. However, my brother grew up in the same household as I did and I don't think he wants to feel remorse because it would mean admitting what he'd done all those years ago. Of course he doesn't want to admit to it - he's in denial. But he learned the same 'lying' lessons I did. I'll explain.

My father did the best that he could, too. For a long time I channeled all my anger at him because he would spank me. It was, to me, the only form of abusive that existed. It was the 80s and that was the only form of abuse that was talked about. They weren't very nice spankings, I'll admit. I'm sure he would too. I learned early on that if I were going to get into trouble for something that I'd done, it was better to lie about it because I was going to get spanked no matter what. He would say that the spanking would be far worse if I lied, but I would run the risk of him not finding out because I was unable to distinguish the difference between the "you broke the vase" spanking and the "you broke the vase and lied about it" spanking. All I knew was that I was getting spanked. If I lied and got away with it, there was no spanking. For him, now, I think he feels remorse. I don't know how much, or if he's remorseful for spanking me every time he thought I deserved it, but deep down inside I think my father was actually the more loving of my parents and I failed to see it because he was more physical. He also didn't know how to show that he loved me because I was his daughter and he didn't want anyone to ever think he was molesting me or having an inappropriate relationship with me in any way. That was constantly a fear for him. It drove more of a wedge between us because I didn't understand that at the time, but I genuinely think he tried.

In the end I guess it's a smaller percentage that will ever feel remorse for causing pain to others, but there are some that do.  We can't lump them all together in one large group.  Saying "they're abusive so they don't feel remorse" is every bit as damaging as not forgiving those who have done the damage to us in the first place.  Forgiveness isn't for the offender, but for the forgiver.

I don't see my father because he's still with my mother, and because the damage has been done. I'm certainly not innocent in everything, but I can at least admit fault. I was a Hellion. That doesn't mean I deserved the abuse. 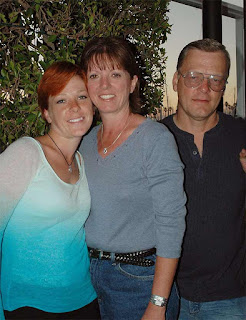