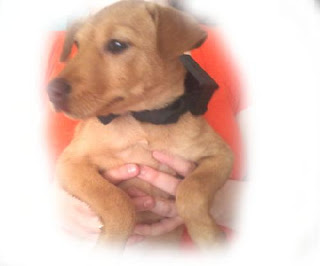 While many of my friends know that I've been working on a children's book having to do with animals and Pirates, the title of the blog needs to be explained clearly and quickly to avoid any confusion.  This blog has NOTHING to do with the book and is in fact a true story.  It is also NOT for the weak of stomach or frail of heart.  This is the story of January.

Like many other dogs at G.R.A.C.E. Animal Rescue, January had a hard life before she came to us.  She was born in a small village in Taiwan, where the people value and enjoy dogs - just not in the way we do.  To the majority of people in Taiwan, a dog is just as valuable as a chicken, goat, cow or pig - and for the same reason.  Many dogs AND cats are eaten every day.  They haven't made the same pact with the creatures we call our pets.  To them, they are the next meal.  While that's quite sad to many of us, January's story is much worse.

THIS is where the story gets hard to handle.

She was only a tiny baby when the poachers found her.  Her litter mate was caught before her, and though she cried, she was killed quickly. The poachers skinned the puppy and tossed it to the side to collect later.  They moved on to the next puppy.

The tiny little tan face looked up at them in fear and astonishment.  She couldn't believe what had just happened to her baby sister - now dead and waiting to be cooked for dinner.  The tan puppy began to scream, upsetting the other puppies waiting in the hands of the other poachers.  She squirmed.  She knew what that machete would do if it came near her throat.  That was how her sister had died.  She jumped and yelped, never letting up.  She fought for her life - at 4 weeks old.

The machete cut into her neck but she refused to stay still. She only screamed louder and wiggled more.  She tried to bolt, but the poachers had a good grip on her.  All that happened was the blade cut her behind the ear instead of on her neck.  Still, she was alive.  But the cut hurt and the tan puppy screamed louder.  She was in pain, scared for her life and desperately needing help.  But no help came.

The machete was in position again. Again, she screamed and cried, trying desperately to get away.  This time the blade cut into her side, cutting her in a moon-shape from her stomach to her spine.  This cut hurt the worst of all.  It was deep - deep enough to have killed the little puppy.  Once more crying out desperate for help, someone finally heard her and a villager came running.  The poachers ran off, but not before leaving one more "S" shaped scar on her tiny shoulder.


The villagers were kind people.  They managed to get a hold of the Animal Rescue Team Taiwan (otherwise known as A.R.T.T.) who took in the tan puppy and her litter mates - or what was left of them.  ARTT was able to stitch up her gashed open side and name each of the babies.  The one with the most damage and pain was where they started, so that first little tan puppy got the first name. They were named after the months of the year - and so her name was January.

January eventually got better, but when the monsoons hit Taiwan a lot of the dogs within the rescues were either drowning or running up into the mountains to poachers, predators and peril - never to be seen again.  ARTT still tries to save as many of their lives as possible, so when they reached out to G.R.A.C.E. Animal Rescue asking for help with the puppies, they immediately said yes.  The puppies were flown all the way over here to California, where they were met at the airport and brought back to the Rescue.  By then January had mostly healed, but her scars would never go away.

January had been going to adoptions for a while.  Nobody wanted the lovely little puppy because she cried a bit too much and the scars on her side were somewhat frightening to most.  Still, her beautiful little face made more than one person feel something for her.  Yet she was never picked up or taken out of her cage.  She was never loved.  She was never held by anyone outside of the rescue.  Even the people of the rescue, including me, never asked for her story.  We never thought to wonder what the scars were from.  We never asked.

Finally, a kind couple came in and held the precious puppy, January.  They cradled her, pet her, kissed her.  They asked where her scars were from.  I didn't know what to tell them.  I didn't have her story for them.  Yet, they didn't care.  They decided then and there that January was going to go home with them and she would have a wonderful life. 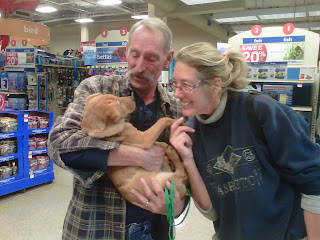 It wasn't until later that night I asked the G.R.A.C.E. Animal Rescue founder about January's story.  She almost refused to tell me, asking several times if I could handle it.  I assured her that I could, so finally she relented and told me.

I used to get frustrated with January for crying or yelping from time to time.  I would think to myself "Why can't that dog just shut up?"  But that cry, that yelp, is what saved her life - and the lives of her litter mates.

January, the hero, that determined little puppy who valued her own life life more than most humans I know, finally got adopted. 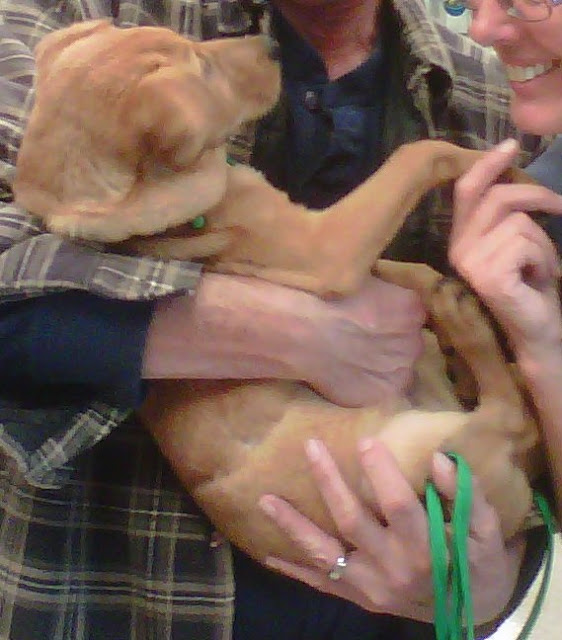