The fifth time I found myself in front of professional cameras wasn't at a modeling photoshoot at all. I had taken the advice of Jack Fleming and applied to be an Extra for television and movie use. The program worked by having the registered people phone in to listen to a series of recordings. If the recordings at any point mentioned that they were looking for a particular person that fit our description, we were to dial the corresponding 2 digit number and leave a message on the voicemail box with our name and identification number. Then the casting directors would look up the name by the identification number, look at the photo and decide if the person who left the message matched what they were looking for or not. If so, they would call the person back with details of the shoot date and location. The person would confirm if they could make it or not, and that was that. The shoot would be booked.

But I found myself busy with working 2 jobs, both full time positions, and I never called in. At the time I was working at Kinko's from 8am to 4 pm, 4 or 5 days a week. When I left there I would work the dinner shift at Colombo's Italian Steak House in Eagle Rock CA, sometimes staying on shift until midnight, and on a rare occasion, 2am. That was 4 to 5 days a week, and sometimes split shifts on the days I wasn't working at Kinko's. It wasn't unusual for me to pick up a lunch shift here and there. I just didn't have the time to model anymore, or call for acting positions. I had also recently signed up for taking a college course online at Pasadena City College. To this day I'm not sure how I pulled it off, but the class I took was Physics. Of all the classes to take online, that was probably not the best choice.

I was on my lunch break at Kinko's one day when I pulled my mobile phone out of my pocket to check my voicemail. I'm sure anyone watching from a distance would have known instantly that either I had won the lottery or I had just been told that I was a princess lost from birth an my royal family wanted me back. 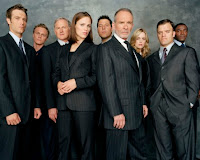 "This is Michael from Casting Call services. I'm looking for Amanda Blackwood in regard to a position that's opened up. If you still have short red hair, please call me back right away regaring a possible role on the TV show Alias. Thank you, have a nice day."

I screamed silently. I immediately called the man by the name of Michael back and explained that I did still have my short red hair. He seemed excited until I told him I worked two full time jobs.

"The shoot will probably be around 10 hours and it's next Monday. Can you do that?" I was a huge fan of Jennifer Garner at the time. I agreed that I could without hesitation. "Good, next Monday be at the Hotel Figueroa at 5:30am - you'll see signs. You're going to be in a hooka bar sceen in Amsterdam, so try to dress appropriately if you have anything. It's suggested that you wear your own clothes, the costume department doesn't bring enough for every extra. Do you have anything that will work?" I knew I didn't, but I would by the end of the day. I said yes. "Good, I'll see you on Monday."

I flew to the nearest shopping mall after work and purchased the most appropriate outfit I could find. I couldn't believe it, I was going to be on one of my favorite shows!