I was so excited about going on the tv show Alias. I bought a cute pink top and brand new jeans. It was the first new outfit I had bought for myself in a number of years. I was very proud of the top and jacket, but especially proud of my jeans. I got my hair freshly trimmed and bought a new pair of high heels. I felt like I was ready to go. I guess I didn't know what girls in Amsterdam wore to Hukka Bars.

My boss at Kinko's was reluctant to give me that following Monday off work to go be on a television show, but I was more than convincing when I said it would be my first and last. I got even more anger and frustration from Mr Blackwood. When he found out that the casting services had contacted me with a job offer rather than me having to phone in he was very upset.

"I spent how many years trying to be an actor and a stunt guy, and I can't tell you how many times I saw the same thing happen. What did you do, promise to sleep with him? I mean, the pretty girls always get the jobs. All you have to do is give them something they want and the jobs are yours." I took incredible offence to that remark and though I won't go into details, we got into a huge blow-up over it. I told him that I didn't plan to ever call in to check the jobs, and if the service calling me was a rare thing, then it wasn't likely to happen again.

My boss at Colombo's Italian Steak House was always wonderful with me and completely understanding. He even told me to let him know what Jennifer Garner was like in person.

The day came and I was out of the house by 4am that morning. I got to the Hotel Figueroa by around 5am and knew I was early. Sure enough I saw all the signs guiding me to the right area, and still I drove past the parking lot three times before I turned fast enough to get in to it. Being in the downtown Los Angeles area, the one way streets were always rather confusing. I waited in the heat of my car on that cold morning for a while until I saw other people starting to show up. Finally I gathered my courage up and walked as proudly as ever to the tents where all of the 142 extras were supposed to meet. Inside I was trembling in fear and the shy terror I felt was nearly enough to make me turn around and run the other direction - but nobody would have ever known that from my walk. I've always made sure of that. I felt that if I walked in to a room like I owned it, nobody would tell me I didn't. I might as well have been on the catwalk.

Makeup counters and lights abounded in the tents around the edges. The girls were all being looked at one at a time in the bright lights, their clothes scrutinized. Some were getting their hair touched up with ringlets, others were getting it pinned up if it was long and in their eyes. Finally it was my turn.

Most of the girls seemed crabby and grouchy, probably from being up so early in their morning. It's a well known fact that girls in California need more beauty sleep than anywhere else in the world. That could be because they're too lazy to do anything though. The vast majority of pretty girls in California expect to skate by on looks alone, getting married to some doctor or lawyer or plastic surgeon, the poor dilusional twits. (for Sage)

Finally it was my turn. One lady looked at me and beckoned me over to where her makeup table sat. I eased into the chair, still nervous but still too proud to show it. Some small talk took place, she mentioned how my makeup was completely perfect. I explained that I had learned everything I knew from magazines and never had a makeup artist for a single photoshoot I did as a model up until that point. She added some false eyelashes to my eyes, teaching me how to put them on as she did. She powdered my nose and gave me some bright blush, and then called over one of her friends from the wardrobe trailer.

"She's perfect!" Suddenly I was whisked away and rushed into the wardrobe trailer. The women oohed and aahed over me, picking up various things and holding them in front of me. Outfit after outfit was held up and tossed aside. Finally the words came.

"I've had this outfit that I've been saving for just the right girl now for months. She's just right." They pulled out a black crochet dress that was completely see through. I panicked! Then they pulled out a maroon colored slip dress, handed both to me and told me to go change. The dress fit like it was made for me. Then came the shoes. They pulled out a pair of green aligator stillettos with a 4 inch heel on them, put me in them, and sent me teetering on my way. Back to the makeup girl I went, where it was suddenly imperative that I have darker eye shadow and bright red lipstick. I'd never worn red lipstick before. I felt vulgar - until I looked in the mirror. Suddenly I felt like a movie star.

The entire group of 142 extras were marched to the front doors of the Hotel Figueroa in downtown Los Angeles. As soon as we were inside, we made a left turn and went down a staircase. As we made our way down the stairs, my heels nearly made me take a head dive straight into the croud. I held on to the handrail the whole way down but I still struggled with every step. 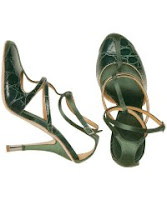 The casting directors (there were more than one) scanned all of us as we came into the room at the bottom. The lights were all turned up very brightly, but I knew that I was still lost in the croud of people. Somehow the casting director singled me out. He pointed at me.

"You," he said, pointing, "Come here." For a moment I thought I was in trouble. Then I saw him waving over someone from behind the cameras. "What do you think," he asked the newcomer. I was getting the same look from these two that I got from the ladies back at the makeup counter.

"She's perfect," the other gentleman agreed, and they whisked me off to sit with the rest of the extras. Confused, I sat in silence for a long time. Action buzzed everywhere around me.