Earth: Ever changing, ever evolving, constantly volatile but somehow just barely balanced enough to support life in some form... If you took out the word Earth and put in my name, that definition would still work.


My eyes remained shut for a long time. I knew everything around me was shaking, but I figured it was a little one - nothing to worry about. When it didn't stop and only got stronger, I began to feel a tremendous amount of fear, freezing my legs solidly in place. My bed jumped up and down on the floor, shaking violently. I could hear my parents shouting as my father thundered down the hall way. As in my zombie dreams only 5 or 6 years previous, my father rescued me from my horrible fear.

He barged into my room clad in the bed sheet he had obviously yanked from the queen sized water bed. I had a favorite plush toy back then - a rather large white gingham dog my brother had given me for Christmas a few years before - and my dog was right there in bed with me. I held tightly as I leaned up to grab my father. He didn't stop to say much, but I remember he said something. Most likely it was something along the lines of "we need to go." He swung me up into the air over his shoulder and headed out of the room. I was still clutching the ear of my large gingham dog.

Car alarms whirred in the streets everywhere. Dad bounced off the walls as he tried to get to the stairs. Dogs howled and barked, including our two dogs trapped in the back patio. We finally made it to the stairs, my hair swinging wildly around and stinging my eyes. I tucked my head closer to my fathers strong arms as he carried me down the shaking, rumbling staircase. Somewhere ahead of him, through the gap between his arm and body, I saw my mother bouncing from the wall to the railing like a marionette puppet with a child operator. My brother was right there with her. Suddenly I dropped my gingham dog and I watched in horror as he bounced violently down the stairs behind us.

The year was 1992 and I believe the quake was finally recorded as a 7.6 on the richtor scale. As we stood out in front of the house that day my mother, fearless as ever, was pointing out the cars rocking back and forth on their tires, the carports over them swaying as if they might collapse any minute. I wanted to be as brave as she was, but I was a miserable failure at it. Instead I burried my face in one of my parents, though I don't to this day remember which one, and shook as hard as the earth until long after the quake stopped. 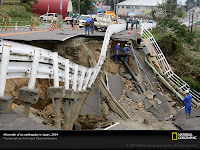 My father has always been a leader. Without meaning to sometimes, he is the one who makes decisions in a group. There was no evacuation plans in the neighborhood, or even a neighborhood watch, but when people were gathered in front of their houses not knowing what to do, they all looked to him to be their leader.

Electricity was out all over the base. Until it had gone out, the street lights would flicker ominously in the early morning hours. It was only a little after 5am when the quake hit. My faher convinced everyone to stay outside for a while - even though they were cold and barefoot - because he knew the after shocks wouldn't be long in following. We collectively shivered outside for 5, 10, 15 minutes before we finally went back in.

I don't remember if we went back to bed or all sat in the living room together, but I'm positive none of us got any more sleep. Before we had moved to California, one of my mother's friends had told her that California was due to drop off into the middle of the ocean sometime soon, and she was pretty convinced that was the begining of the end. We all felt like it was. Who knows... maybe it was.

I don't remember going to collect my gingham dog, or my father finally being able to shed the sheet and put on some proper clothing, but I do remember weeks and weeks later Dad coming home with shirts that said "I survived the Lancaster / Palmdale Quake" with several numbers crossed out underneath it. It seemed there had been a discrepancy about the actual power of the earthquake, and the numbers crossed out were the innitial readings. The numbers crossed out were, I believe, 7.1 and 7.4 - with 7.6 not being crossed out. Researching for final acuracy, I've only come across one article on the earthquake and it was listed as a 7.9, but what are numbers to a kid?

An ominous crack began edging its way around my brothers entire room that day. For several years we were convinced that his room was going to fall off the end of the house. We even had the base housing authority come by to look at it. They said it was fine, but if it kept growing we would have to contact them again. I had a mental image of it growing at night like tearing paper, and my brother waking up on the lawn outside.