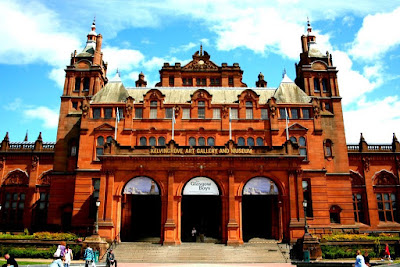 My head still buzzing with the hours spent at the Wallace Monument the day before, Robert whisked me off to the Kelvingrove Art Museum to help fill my apetite for knowledge and history. Once more I found myself in awe of the architecture I was suddenly surrounded by. The stunning red building that housed the priceless works of art was made of the same stone as the Bothwell Castle we visited on my first morning in Scotland. The building was huge, and try as I might, I couldn't capture the entire body of the structure without crossing the street, climbing a telephone pole and hanging out from a tree limb. 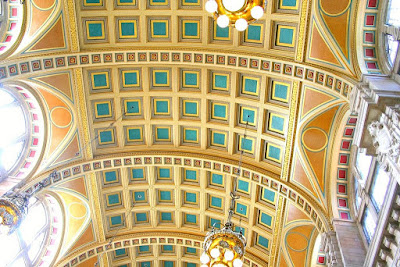 As soon as we walked inside, my first thought wasn't for the priceless art I could smell and taste in the air, but to look up. The building itself was a miraculous work of art, aparently built the wrong way around. The front was meant to be in the back, and the back was meant to be in the front - or something along those lines. Surprised at that particular story, I wanted to see every side and every angle of the structure... AFTER I got to see what was on the inside.

The first room we wandered into completely blew me away. There before me were Egyptian artifacts from the days of the Pharaohs. I remember when I got back to the States people were asking about why Scotland would have Egyptian artifacts in a museum. I remember quite proudly and defensively answering them with my own question - why would there be Greek artifacts in a museum found in America? A museum is a museum. There were plenty of Scotish artifacts in the museum as well, but the first ones I saw just happened to be Egyptian. 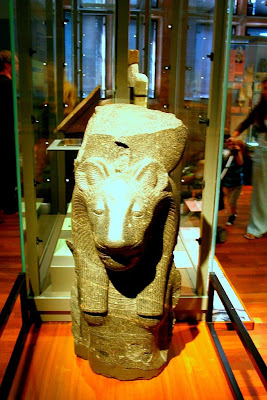 The photo to the left is of an Egyptian Goddess. The story that the Egyptians told in hieroglyphics was that she had tried to kill all of the people of Egypt with her breath of fire one year about 2,000 years ago. Scientists have since discovered that the year in question had been one of the hottest years in the nations history.

This and several other ancient pieces of Egyptian history were displayed in the open - no glass, no barriers. Anyone could walk up and touch any of the items. No alarms would go off. No parents would shout at the kids not to touch. No museum guards would throw someone out for it. Stunned, I asked Robert.

"Can I," I paused a moment, still in disbelief as I watched him reach a hand out and run his fingers over the body of a sarcophagus, "can I touch it?"

"Yeah," he said, confused. "Why wouldn't you? It's there, isn't it?" I can only imagine how strange my question would sound to someone who wasn't used to the way American's put a museum together - much like a mother's china cabinet: Look but don't touch. Gingerly I reached a finger out and felt the cold, smooth surface of the lion goddess' eye lid. I ran my finger down the length of her nose, marveling at the texture of the stone - it was as smooth as glass! It was more than two thousand years old, and I was touching it with my bare hands. 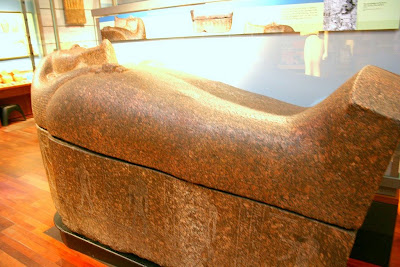 My gaze next fell upon the sarcophagus I watched Robert touch. Slowly, afraid of disturbing anything, I made my way over with my mouth hanging open. Again, this priceless relic was out in the open, available for anyone to touch and feel, to trace the ancient carvings on its surface. The mummy had long since been removed, but the stone would have been far too heavy for anyone to lift by hand in the museum anyway. 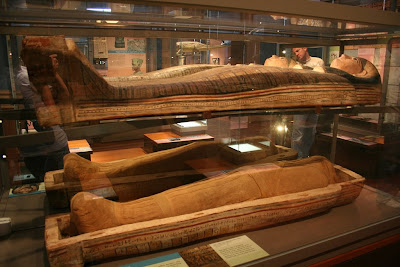 I stood for a long time and traced the edges of the intricate carvings with the tips of my fingers on my right hand. I traced every detail across the chest and even got down on my knees to look closer at the sides of the sarcophagus. It was so intricately designed that I suddenly felt like a complete failure as an artist. Nothing I would ever create could compare to something so precious.

Egyptian Gods were carved on the surface, showing the path into the afterlife. The Egyptian god Thoth, who had the head of an ibis (a type of bird) was one of the more prominent symbols on the sarcophagus. Thoth was the god of Wisdom and of the Moon. I don't pretend to be an expert on Egyptian history, mythology or hieroglyphics so I wouldn't even begin to guess at the significance of that particular character on the sarcophagus, but the fact that it was there, under my fingertips, will remain in my memory all the days of my life. 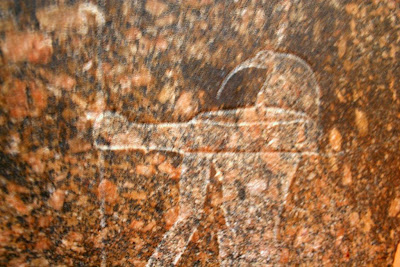 The Egyptian room of the museum wasn't huge, so it didn't take long to see everything in the room and move on - and next was the opportunity to learn more about Scotland and the way the people fought and died so many years before. With William Wallace fresh in my mind, I was more than ready to learn everything I could about the proud nation and it's amazing people.