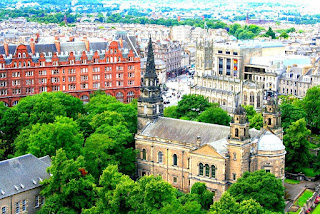 We wandered out of the castle and tried for a few minutes to decide which direction to head in. Since the Royal Mile was probably the most infamous, it was eventually the decision we made, but any direction would have been educational, beautiful and incredible.

An ice cream vendor had set up shop just outside the main castle gates and we stopped briefly for a couple scoops of vanilla. To top it off was a rolled piece of flaky chocolate I had never seen before. It didn't melt in my mouth the way normal chocolate did, but the texture and taste was unmistakable. I love trying new things - especially sweets! It was new, but it was great. 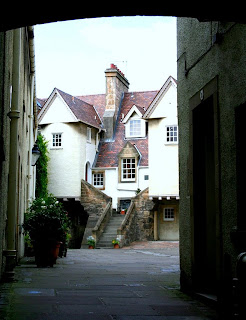 We began our wanders down the Royal Mile as we ate our ice cream with gellato spoons. It was incredible, seeing some structures that were several hundred years old coupled with new banks and glass-faced Raddison Hotel buildings. Some of the older buildings and homes (such as the one on the left) even had a date carved into the stone surface over the door.

Peeking through small alley ways I was able to see a myriad of these types of places, this one dated 1623 and looking its age in some areas. Others looked like they had been standing far longer than that, and at one time had been surrounded by woods in order to hide the ancient witch that lived within its depths. Everywhere I looked, I would breath in the history and architecture of my surroundings. 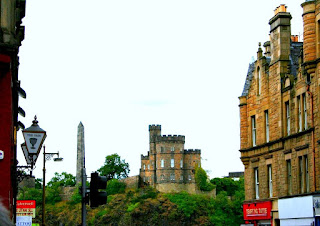 There were small side streets that would cut off after only a few hundred yards - barely big enough for a few cars to park - but with all the people out walking the Royal Mile that didn't matter much. There weren't many cars brave enough to drive down that famous road with all the tourists filling the paths from one end to the other. Always heading at a downhill pace, I knew going back the other way would be far more difficult. Still, we were out for adventure, what else mattered? 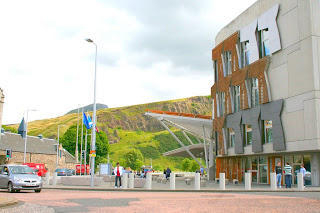 We walked all the way to the end of the Royal Mile where we found the new Scotish Parliament building - ugly as it was. The surrounding areas were so lovely and ancient. To find such a modern building among such imaculate and beautiful history seems so out of place I couldn't do much but mutter about how the windows all had bars over them, even up in the top levels. It was as if they weren't worried about people getting in so much as they were about people trying to get out.

The Scotish Parliament building was built as recently as 1999 when the UK granted Scotland permission to have their own Parliament back. They hadn't had their own Parliament since 1707 when all the powers were handed over to England. From what I've gathered after speaking to the people of Scotland, the building was the subject of much controversy. First they couldn't decide where to place it, and once they finally did the project took much longer than originally forecast to build. When finally it was done, it had gone so far over the budget that it left a gaping hole in the pockets of the Nation. While this sort of thing happens often in the United States, for a country as small as Scotland, I have a feeling the effects are still being felt. 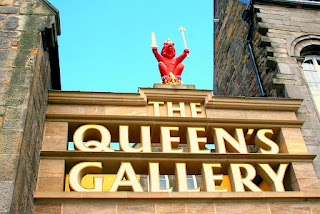 Across from the Scotish Parliament we spotted the Queen's Gallery. While the building itself is old, the Gallery itself was only opened in 2002 to coincide with Queen Elizabeth II's Golden Jubilee. The collections within change on a semi-regular basis, constantly leaving the visitors with something new to see. As I write this story, I've dicovered that a Royal Photographer's works are currently being displayed there, includng photos of a young Queen Elizabeth II and her younger sister, Princess Margaret. 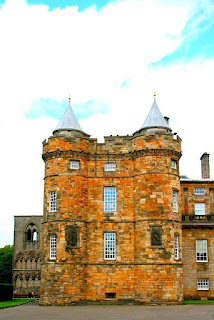 Just beind the Queen's Gallery is Hollyrood House, the Queen's official residence in Scotland. Finally it started to make sense, why the street we were on was called the Royal Mile. At the far end, the street went directly up to Edinburgh Castle, while the end we found ourselves standing on actually went to a dead end right in front of the Hollyrood House, built nearly 900 years ago. It was originally meant to be the home of Mary Queen of Scots and was built by her father, James V. It was later the headquarters of Bonnie Prince Charlie in 1745 after the Civil War and then a place of refuge for a French ruler. Some of the exhibits from the Queen's Gallery actually spill over into Hollyrood House and the residence is partially open to visitors when the Queen is not at home.

All to quickly we were winding our way back toward the Castle and then back to my home for those 10 days. My mind swirled with the new information that had been crammed into it. I absorbed some things like a sponge as I pushed other useless facts out of my mind. My hangover still wasn't gone, but I had enough to think about to have a good, healthy distraction. I needed to let my brain settle though - for Robert had another adventure in mind for the following day - with more hands-on experience!