Inspiration Behind It All

I have many different things that inspire me to write.

Some days it's the overwhelming desire to tell a story, like yesterday's multiple postings telling of my adventure on my first television filming. Occasionally its sparked by a question from a reader, asking me what something was like or what happened when. Sometimes it's a person that I see every morning; every night, who mentions something to me that sparks a memory. Sometimes it's an old movie or program I remember from my youth coming on the television. 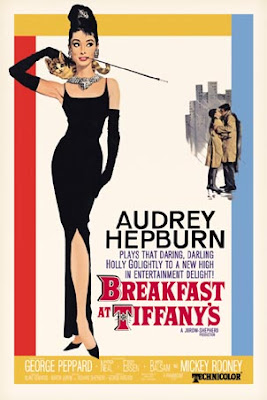 I sit here watching "Breakfast at Tiffany's" today on the big box before me remembering the first time I ever saw the movie. I must have been about 12 years old at the time, give or take a year. It had come on TV and my Mom was watching it when I came in from school. I remember sitting down with her and being completely in awe of not only the character that Audrey Hepburn was portraying, but her own personality coming through the character when she sang that infamous song "Moon River." Years later I found out that the song was nearly taken out of the movie and she stood up so fast that she knocked the chair out from under her. She told the producers that if they took the song out they could find someone else for the role. Since she had come out of an early retirement for the role, the producers quickly changed their minds and a legendary movie was born.

It was about that time that my great admiration for Audrey Hepburn was born. It was right around the same time that she died unfortunately. I had just found the greatest humanitarian and actress on the face of the earth and she was ripped from the world in such a horrendous way.

It's the things that Audrey Hepburn did when she wasn't acting that eventually inspired me so much, not her roles in the movies where she would portray different characters. I have always wanted to be as beautiful and memorable and talented as she was - but more than that I've always wanted to be remembered for being such a wonderful person.

She gave up her privacy - and eventually her own life - in the quest to help others. I can only hope that someday I'll get my chance.